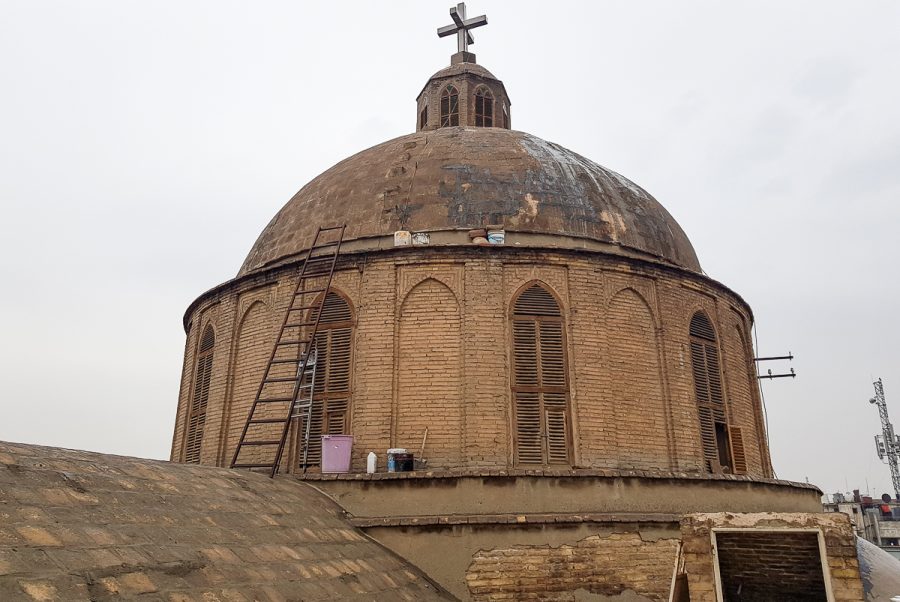 In 1942 -1943, Polish soldiers stationed in Baghdad worshipped in this church with their chaplain Monsignor Joseph Gawlina.

The Saint Joseph Latin church in Baghdad is a cross-shaped building magnified by a remarkable hemispherical dome with a circular drum and windows, elevated at the crux of the transept at a height of 32 metres, mounted with an octagonal lantern at the pinnacle of which is a cross. Clearly visible from afar, the church stands out like a lighthouse in the neighbourhood.

The church has suffered as Christians have moved to more modern districts of Baghdad, away from the disruption from the souk which has spread all around the building. It desperately requires a full restoration.

The Saint Joseph Latin church is located at 33°20’19.9″N 44°23’47.5″E and 42 metres altitude, on the eastern bank of the Tigris, in the old neighbourhood of Chorjah, in Aqued el Nassara (the former Christian quarter), in al-Khulafa street. The St Joseph Latin church is located at the centre of a large souk, just one hundred metres from the Om al Ahzane Chaldean church (see file), next to which the Syriac-Catholic Church of Our Lady of the Immaculate Conception is currently being destroyed.

Although Christians who follow the Latin rites constitute a small proportion of the total Christian population in Iraq, they are often in close communion with the Catholic faithful from other Chaldean denominations: Chaldean, Syriac-Catholic, Armenian and Greek Catholic. Though they undisputedly constitute the majority of Christians in Iraq, the Chaldeans numbered 750,000 in the last census in 1987, compared to 300,000 Assyrians (Church of the East and the Ancient Church of East). The total number of Christians in Iraq amounted then to 8% of the total population. How many were there in 2018? The data collected by Mesopotamia’s correspondents confirms the demographic collapse reported by the communities visited. There are less than 400,000 Chaldeans in Iraq, living in Baghdad, Kurdistan, the Nineveh plain and Basra. The disasters faced by the Christian communities in Iraq have not ceased since its independence in 1933. There was no respite at the start of the 21st century with the American invasion in 2003 and the terrible sanctions imposed by the UN, along with the violence and persecution perpetrated by Islamicist and organised crime groups since the fall of Saddam Hussein’s regime, targeting Christian communities.

Origins of the Latin presence in Baghdad

As of 1235, one of the companions of Saint Dominique, Brother William of Monferrat was sent to the East by Pope Gregory IX. When he arrived in Mesopotamia in 1237 it is said that he went to Baghdad to the court of the Caliphate.

The Latin diocese of Baghdad was created on 6th September 1632, at a time when the region was dominated by Persia and religious and political power was held in Isfahan. The European powers and the Holy See developed their diplomatic and religious activities in this imperial city, controlled by the Persian sovereigns, in particular under the reign of Shah Abbas I (1587 – 1629). The first bishop of Isfahan was Jean Thaddeus, who appointed the Spanish Carmelite Timoteo Perez as co-adjudicator for Baghdad, “but neither made it to their respective episcopal seats.[1]” The first Latin bishop who actually made it to Baghdad was the Carmelite Bernard of Saint Theresa (Jean Duval). He celebrated mass there in 1642 before returning to France. The 17th century marked the opening of the Latin missions in Iraqi Mesopotamia. The Capuchin Friars opened their first house in Mosul in 1636 and also deployed their missionary activities in Baghdad in the 17th and 18th centuries.

It was not until 21st December 1743 with the episcopal consecration of the Carmelite Emmanuel de Saint-Albert (Jean-Claude Ballyet, known as Dom Emmanuel Ballyet de Saint-Albert de Saint-Antoine, 1702-1773) at the seat of Babylon, that the Latin Bishop of Baghdad was properly installed. Pro-vicar of Baghdad since 1728, he was also named French Consul to Baghdad in 1741 before being appointed bishop. He built a hospice, school and episcopal residence. He died from the plague in Baghdad in 1773.

In 1820 the Frenchman Pierre-Alexandre Coupperie (1770 – 1831) was appointed Latin bishop of Babylon. He played a vital role in supporting the union of the Chaldean church with Rome. Also named French Consul to Baghdad in 1823, he engaged in extensive diplomatic and religious correspondence. On his death in 1831, he was remembered as an admirable prelate and a man who took care of the most deprived during periods of famine and plague: “a holy man” as the current Latin archbishop of Baghdad, Jean-Benjamin Sleiman from Lebanon, likes to recall.

A cross on the wall of the Saint Joseph Latin church in Baghdad.
April 2018. © Laith Basil Nalbandian / MESOPOTAMIA

History of the Saint Joseph Latin church in Baghdad

In March 1917, during the First World War, whilst Mesopotamia was still administered by the Ottoman Empire, the Ottoman Turkish forces requisitioned the Saint Joseph Latin Church and turned it into a hospital. After the empire was defeated and the Turks withdrew the church became a place of worship once again. It was renovated in 1923.

In 1942-1943, Polish soldiers stationed in Baghdad worshipped in this church with their chaplain Monsignor Joseph Gawlina. A bronze bas-relief on one of the walls of the church testifies to this.

In the 1990s, the Saint Joseph Latin church was lent to the Coptic church (Orthodox). This community arrived in Baghdad in 1976 from Egypt in large numbers which required an appropriate place of worship. The Coptic Christians adapted the Saint Joseph church to their requirements and erected an iconostasis to separate the sanctuary from the nave.

When it was returned to the Latin community the church suffered both from the fact that Christians were moving to more modern districts of Baghdad, as well as from the disruption from the souk which has spread out all around the building. It remains, however, one of the most significant monuments in the former Christian quarter of Baghdad, Aqued al-Nassara.

Description of the Saint Joseph Latin church in Baghdad

The Saint Joseph Latin church in Baghdad is a cross-shaped building magnified by a remarkable hemispherical dome with circular drum and windows, elevated at the crux of the transept at a height of 32 metres, mounted with an octagonal lantern at the pinnacle of which is a cross. Clearly visible from afar, the church stands out like a lighthouse in the neighbourhood. The foundations of the Saint Joseph church in Baghdad are now below road level due to subsidence.

This robust, elongated monument is built from earthenware bricks. This is an ancestral construction technique, characteristic of the Mesopotamian style, used to build the houses, mosques, churches and palaces of Baghdad.  The 4-metre thick walls help keep the building cool in the summer and warm in the winter.

The doors, windows and arches are all pointed and form an architectural style inspired by Abbasid influences.

The Saint Joseph Latin church in Baghdad is oriented from north-east (choir and apse) to south-west (facade entrance). The choir of the church is separated from the nave by a choir screen made of white marble tiles. A marble tabernacle with steps backs on to the wall of the radiating apse.  To both the north-west and south-east the arms of the transept terminate in radiating chapels. On the opposite side to the sanctuary, a high tribune occupies the entire width of the building above the south-west entrance.

In the inner courtyard of the church are several graves of Carmelite Fathers and Brothers, the monks and nuns who serve in Baghdad. The headstones require serious maintenance. One of the largest graves is that of the monk and scholar Anstas al-Karamly.

Next to the church is the Carmelite monastery and the Saint Joseph school. The digging of the al-Khulafa road which comes up to the level of the monastery, forced the monks to move to the other side of the Tigris. The school also moved into a new building in the Alwiya (Hay Al-Wahda).

The Saint Joseph Latin church in Baghdad is a dire need of a complete restoration.