The Armenian Apostolic Cathedral of Sourp Krikor Loussavoritch in Baghdad 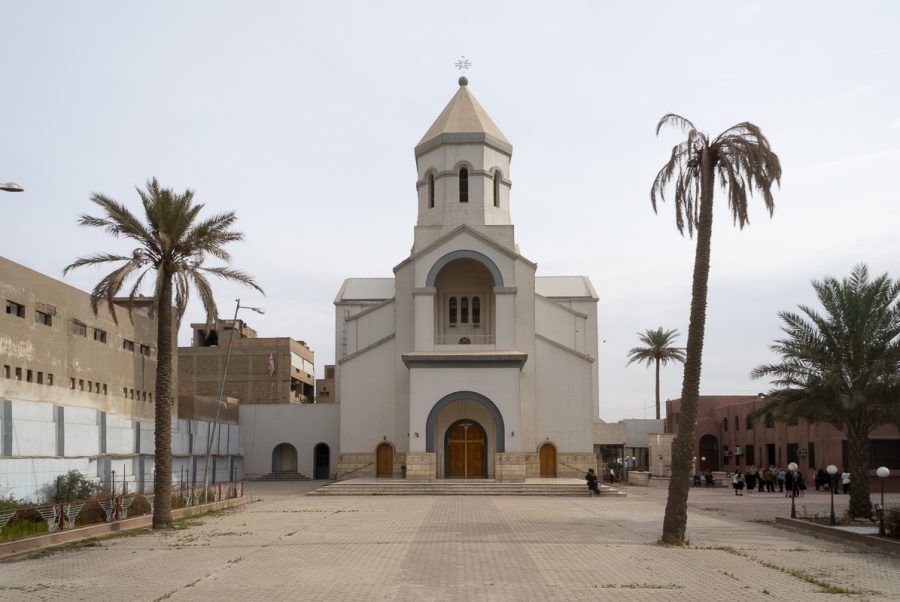 The Armenian Apostolic Cathedral of Saint Gregory the Illuminator was built between 1954 and 1957, on a vast estate owned by the Armenian church, home to a vast Armenian cemetery since 1904 with a mix of ancient and contemporary graves.

It is an elongated, sturdy building made of reinforced concrete, covered in an off-white smooth coating. The lower section is covered with ochre and beige stone facing. Although the exterior is almost entirely unadorned, the cathedral has a wealth of bright furnishings inside.

The building is characteristic of Armenian sacred architecture. It is a monocoque (one single apse to the east) longitudinal (the east-west axis of the cross is longer than the north-south axis) cathedral laid out in a free-form cross shape (the arms of the cross are visible from the outside). Its octagonal cupola is formed from a drum with windows and a pyramid roof.

The Armenian Apostolic Cathedral Sourp Krikor Loussavoritch (Saint Gregory the Illuminator) is located at 33°19’48.39″N 44°24’51.64″E and 39 metres altitude in the centre of Baghdad, less than one kilometre from the eastern bank of the Tigris in the Al-Jadriya district, on the Al-Tayeran square.

Origins of the Armenian presence in Iraq

The origins of an Armenian presence in Mesopotamia have come along for centuries since Antiquity.  In the 1st century BC, the Adiabene kingdom (with Arbeles/Erbil as “capital city”) was part of the Armenian Kingdom of Tigranes II the Great. At the very beginning of the 4th century, the area of Abadiene, which was then the most southern territory of the kingdom of Armenia, became the very first Christian “state” in History, around 301. “There was also probably a meeting in around 328-329 between the only two Christian sovereigns at that time: the Roman Emperor Constantine 1st and the Armenian King Tiridates III. Constantine I confirmed Tiridates III’s role in evangelising the East. This led to the evangelisation of Mesopotamia and the Sassinid kingdom by Armenian missionnaries, as related by the Greek historian Sozomen, in around 402: “The belief progressed amongst neighbouring peoples and grew in number, I think the Persians became Christians due to the close relationships they had with the people of Osroene[1] and the Armenians (…)”[2].”

In the 17th century, new Armenian communities settled in Iraqi Mesopotamia after the Persian Shah Abbas I conquered Baghdad in 1623. In the early years of the 17th century, the Persian king forced the Armenian population of Julfa (former Armenian city in the Nakhichevan, on the northern bank of the Aras river) to exile. 12,000 Armenian people were then moved to New Julfa (Nor Djougha), at the gates of Isfahan, to take part in the development of the Safavid-Persian Empire’s new capital city. After Shah Abas died, the Armenians from Persian endured times of troubles. Lots of them moved to Mesopotamia and settled in Basra (south of modern-day Iraq), whereas others set off to India.

When the Ottoman Sultan Murad IV regained control over Baghdad in 1638 with the help of Armenian Ottoman soldiers and a new phase started for an Armenian settling in Baghdad. All along the Ottoman domination’s period and until the fall of the Empire at the beginning of the 20th century, the Armenians developed their institutions so much that by the end of the 19th century they were nearly 90,000 living in Iraq[3].

The genocide of the Armenians in the Ottoman Empire in 1915-17 was the last and terrible reason of their migration towards Iraqi Mesopotamia. Deported from the eastern provinces of the Empire, coming from the North (Diyarbekir) along the Tigris river, from the West (Ras-al-Ain) along the railway from Aleppo to Baghdad, or also from Van and then coming first through Persia, the Armenians arrived in some relegation areas such as Zakho, Havresk, Avzrok but also Kirkurk, Bakouba and Mosul. At this time a particularly tragic incident took place. In January 1916 over just two nights, 15,000 Armenian deportees living in Mosul and the surrounding area were exterminated, tied together in groups of ten and thrown into the Tigris river. Already, well before this carnage, on 10th June 1915, the German consul to Mosul, Holstein, telegraphed his Ambassador, reporting telling scenes

“614 Armenians (men, women and children) expulsed from Diarbekyr and transported to Mosul, were all killed en route, as they were transported by raft (on the Tigris). The kelek arrived empty yesterday. For a few days now the river has been carrying corpses and human limbs (…)” [4]

Nowadays, the Armenians in Iraq mostly descend from people who survived the 1915 genocide. Rather discreet on the political scene, they were known for being loyal and developed their own educational, social and religious infrastructure.

After Saddam Hussein’s regime fell in 2003, the situation worsened considerably. The attacks from Islamic and Mafia groups against Iraqi Christians also targeted the Armenians and their churches. On August 1st 2004, the Armenian Catholic church Our Lady of the Rosary, in Baghdad, Karada district, was struck by a bomb attack.  An Armenian church under construction was also targeted on December 4th 2004. For nearly 20 years, these successive spates of violence set the tempo for Iraqi Armenians’ mass exodus. The battle of Mosul over the summer 2017 and the bombing intensity also affected the Armenian heritage. Before 2003, there were probably more than 25 000 Armenians in Iraq, whereas today the community leaders assert there are 10 000 to 13 000 Armenians still living in Iraq. Half of them are said to be living in Baghdad. The remainder live in Iraqi Kurdistan, Kirkuk, Sulaymaniyah, as well as Basra. There are no more Armenians in Mosul.

[1] The people of Osroene were the inhabitants of Edessa. Edessa was a major capital city in ancient times, before becoming a powerhouse of Christianity during its infancy.  Armenian tradition recounts that the King of Edessa and Armenia, Abgar V, wanted to welcome Christ to his Kingdom and issued an invitation. It was not Christ who came to Edessa but one of his apostles Thaddeus (Jude). Edessa was renamed Urfa and remained the capital of the principality.  This city has been known as Şanlıurfa since 1984 (in Turkey).

The Armenian Apostolic Cathedral of Saint Gregory the Illuminator was built between 1954 and 1957, on a vast estate owned by the Armenian church, home to a vast Armenian cemetery since 1904 with a mix of old and contemporary graves.

The construction of the cathedral was made possible thanks to the very large donations made by two Armenian philanthropists, Simon M. Gharibian and Calouste Gulbenkian.

Throughout the 20th century, further public buildings were built over time on this impressive religious estate, next to the cathedral and the cemetery. There is a school, an auditorium, two memorials dedicated to the martyrs of the Armenian genocide and a large museum opened in November 1997.

The tradition attributes the evangelisation of Armenia and the creation of the first Armenian Christian communities to the two Apostles of Christ, Thaddeus and Bartholemew, but it was Gregory of Caesarea, known as the Illuminator, who created the Armenian Church in the year 301. Armenia thus became the first Christian (kingdom) State in the world.

The founding story of the nation[1] relates that the King of Armenia Tridates IV, crowned by the Roman Emperor Diocletian, an ardent persecutor of the Christians, fell in love with a Roman Christian virgin, Hripsime, who was exiled to Armenia with a community of women overseen by the Abbess Gayane. The extraordinarily beautiful Hripsime resisted Tridates advances. He took his revenge by torturing her to death and eliminating her and her whole community. After the martyr of the forty Christian virgins, Tridates IV was stricken with a grave illness that the doctors and wise men of the court were unable to cure. At this time the King’s sister had a vision revealing that only Gregory could cure the disease.

Born in around 257, Gregory was a Christian and member of the court who rejected Tridates’ paganism. He also hid from the King of Armenia the fact that he was the son of Anag, who killed Khrosov, Tridates’ father. Thrown into a deep pit (Khor Virab), Gregory miraculously survive for around 13 years. Retrieved from his jail, he healed Tiridates who agreed to be baptised and converted his kingdom to Christianity.

Saint Gregory the Illuminator thus became the first Catholicos of the Armenian Apostolic Church. A vision came to him while he was sleeping about the location of the Etchmiadzin cathedral, which literally means “only son descended”, which became the seat of this autocephalous church.

The Khor Virap monastery where Gregory was imprisoned was built over the pit. This monastery is located at the foot of Mount Ararat in the Republic of Armenia to the south of the capital Yerevan.

[1] The account of the 5th century writer Agathangelos, constitutes the historical basis for the doctrine of the Armenian Apostolic Church.

The Armenian Apostolic Cathedral Sourp Krikor Loussavoritch stands inside a religious estate closed off by a high perimeter wall.

It is an elongated, sturdy building made of reinforced concrete, covered in an off-white smooth coating. The lower section is covered with ochre and beige stone facing and decorated with Armenian crosses. Although the exterior is almost entirely unadorned, the cathedral has a wealth of bright furnishings inside.

The building is characteristic of Armenian sacred architecture. It is a monocoque (one single apse to the east) and longitudinal (the east-west axis of the cross is longer than the north-south axis) cathedral, laid out in a free-form cross shape (the arms of the cross are visible from the outside). Its octagonal cupola is formed from a drum with windows and a pyramid roof mounted with a metal Armenian cross.

The entrance to the building, to the west, is preceded with a three-level bell tower porch with rotunda with an octagonal drum dome, mounted with a metallic Armenian cross. Inside, a large tribune reserved for the choir overlooks the sanctuary which contains a wall painting of the baptism of Christ by John the Baptist. A choir screen separates the nave from the Holy of Holies, the lower section of which is open to the faithful for Holy Communion and the upper section of which, the bem, is reserved for the priests and deacons. A curtain closes off the bem, where there is a high altar with steps shaped like an arch, covered in marble, adorned with an icon of the Virgin and Child, mounted with three small drum domes. Behind the high altar is an ambulatory, which runs along the apse wall. Either side of the altar are the baptistery, to the left, and sacristy, to the right. The walls are decorated with several paintings by masters and reproductions of works. Six large chandeliers diffuse light sumptuously throughout the nave.

Outside, on the esplanade are two memorials dedicated to the martyrs of the Armenian genocide, in-between which stands a khatckar (a finely sculpted Armenian stone cross). The first memorial, erected in 1990, contains the relics of martyrs removed from Deir Zor (Syria). The second, positioned opposite, was built in 2015 for the centenary commemorations of the genocide.

The large room in the building to the south of the church is also of note as it contains an exhibition of one hundred paintings by the artist Antranik Ohanessian. Produced over a two-year period, these strikingly realistic works reveal the drama and horror of the extermination of the Armenians in the eastern provinces of the Ottoman Empire in 1915-1917.

Monsignor Avak Assadourian[1] is Archbishop and the Primate of the Armenian Apostolic Church in Iraq since 1980. This longevity and stability is remarkable in a country that has experienced such extensive turbulence and numerous catastrophes. Monsignor Avak Assadourian has held the course through all of Iraq’s modern-day crises: three Gulf wars, the decline and fall of Saddam Hussein, the American occupation and economic sanctions, the emergence of Islamicist fundamentalists and associated organised crime, along with anti-Christian persecution, and the exile of the Christians of Iraq.