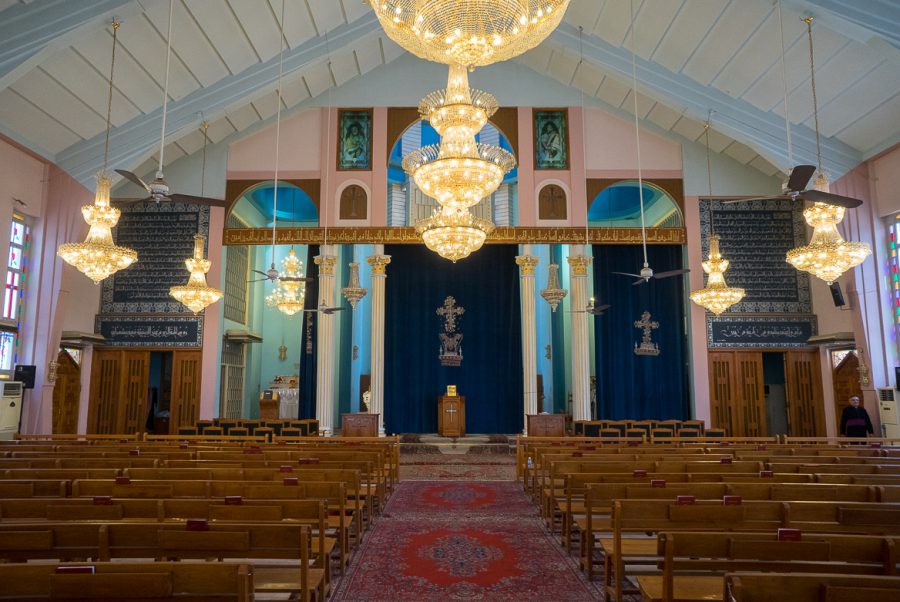 Dedicated to the apostles St Peter and St Paul, the cathedral has been consecrated on May 9th1964 by the Patriarch Mar Ignatius YACOUB  III. The building of the cathedral had been made possible thanks to the donation of the great donor Abdul Majid ZAYOUNA.

Since Islamic fundamentalism emerged and since Saddam Hussein’s regime fell, St Peter and St Paul cathedral has been twice the target of car bombing terrorist attack.

St Peter and St Paul cathedral is a large and wide church of more than 1 800 sq metres, north-east oriented.

It looks like a large hall, with no inside pillars or columns, and topped by a high sloping two-parts ceiling.

It is located in the very heart of Baghdad’s town centre, on the eastern bank of the Tigris River, in the district of Al Wahda, in Al Sinaa Street (“Industry Street”).

The origins of the Syriac-Orthodox Church

It is in the year 38, in Antioch, that the Church was born and that the disciples of Jesus were first called Christians. Antioch was in those times the capital city of the Syrian province of the Roman Empire. The Christians of this province, which stretched from the Mediterranean Sea to Persia, were to be called “Syriacs” or “Syrians”. Antioch became then a central place for Christianity throughout Roman Syria and the Middle-East, hosting one of the three theological schools of all Christendom, the others being in Alexandria and Constantinople.

The theological founding principles of this Church were then mainly based on Aristotle’s philosophy, whereas Platonic theories were rather developed in Alexandria.

Faced with the prevailing Greco-Roman political and cultural influence, Antioch, together with the great city of Edessa (nowadays Urfa in Turkey) developed a Christianity based on Syriac language and culture, which spread progressively throughout all Mesopotamia.

The Syriac tradition agrees to attribute the evangelization of Mesopotamia to the apostle Thomas and his disciples Addai and Mari, however, “it seems that the introduction of Christianity in fact goes back only to the beginning of the 2ndcentury and that it was conducted under the influence of Judaeo-Christian missionaries from Palestine[1]”.

This Mesopotamian Christianity started organizing itself in Seleucia-Ctesiphon, on the banks of the Tigris River, 30 km south from Baghdad, where the tradition reports that Saint Thomas made a halt on his way towards India.

And it is right here, on a hill of the Koghe district, that the first patriarchal church of the Church of Mesopotamia was built and its catholicate was then established. This Syriac-language-based primitive Christianity still nowadays form the shared foundation of the local Iraqi churches and of their communities, which perpetuate this Christianity’s heritage and handover.

This shared foundation was progressively split into several churches from the first councils on and up to the 20thcentury, for geopolitical and Christological reasons.

Indeed, the first ecumenical Council of Nicea in 325, convened by the Roman Emperor Constantine I, was held without the Persian bishops, except from Jacob of Nisibis, as “it was out of the question to the other bishops, in times of never-ending or nearly never-ending war, to go and sit in an assembly held in an enemy country, convened – and even more presided – by the Roman Emperor.[2]”

It should be said that from the Constantine’s conversion to Christianity on, the Sassanian Emperor Shapur II turned from tolerance to mistrust regarding the Persian Christians. This mistrust even turned to hostility: churches were wrecked and the members of the clergy were persecuted.

« The aim of persecution was not so much to wipe the Christians out, but rather to force them to abjure their faith, once their hierarchy would be annihilated. [3] »

A century later, in 431, the Council of Ephesus sentenced the Patriarch of Constantinople Nestorius, who professed the two distinct natures of Christ (hypostasy): both divine (son of God) and human (son of the Virgin Mary). This Christological thesis was considered as heretic and Nestorius was removed from office. Due to geopolitical rivalries between the Roman Empire and the Persian Sassanian Empire, the Church of the East turned to Nestorianism from the second half of the 5thcentury on, and it spread throughout Mesopotamia, Persia and up to India.

20 years later, in 451, the Council of Chalcedon came up with a new Christological controversy. The Syriac, Egyptian, Ethiopian and Armenian Churches were blamed for professing a monophysite theory, i-e that within the person of Jesus Christ, the human nature was absorbed into the divine nature. Christ only has one divine nature. This discussed theory led to a new schism and the 4 Churches, concerned to preserve their own geopolitical interests, became autocephalous churches.

In the 6thcentury, Saint Jacob Baradaeus, a Syriac monk, reorganised the Syriac church. After being ordained as a bishop, he set off for a long travel in all Syriac places to ordain number of bishops, priests and deacons. The Syriac-Orthodox Church was then named after him “Jacobite” Church, in his honour. He is considered indeed as the founding father of the Syriac-Orthodox Church.

For many centuries, the Syriac-Orthodox Church was separated from the Western Catholicism and managed to grow in situations that were often complicated like the arrival of Islam, the Arabic conquests, the Abassid califate from the 8thto the 13thcentury, the Mongols’ invasions, the fall of Constantinople in the 15thcentury and the Turkish-Ottoman persecution.

Along the centuries, the Syriac-Orthodox Church settled mainly in the southeast of nowadays Turkey (Tur Abdin area), in the east of Syria and in Iraq. It developed a strong ascetic and monastic movement, built bishoprics, and managed to survive the Mongols raids in the 13thbefore enduring its own schism in the 18thcentury, which led to the creation of the Syriac-Catholic Church, reporting to Rome.

1915-1917 was a breaking point. The Syriacs from Tur Abdin were, just like the Armenians, slaughtered by the Turkish and the Kurds during the Armenian genocide. A large number of survivors settled in Iraqi Mesopotamia, in Mosul and in the Nineveh plain where some Syriac communities were already present, as well as in Baghdad where they arrived mainly in the 60’s. All along the 20thcentury, numbers of Syriac Orthodox worshippers from Turkey, Lebanon, Syria or Iraq fled beyond the East and created new communities in Europe, in the US or in Australia.

The story of the construction

Dedicated to the apostles Saint Peter and Saint Paul, the cathedral was built between 1962 and1964 and consecrated on March, 9th1964 by the Patriarch Mar Ignatius YACOUB III.

The building of the cathedral had been made possible thanks to the donation of the great donor Abdul Majid ZAYOUNA.

Since the Syriac Orthodox archbishopric of Baghdad opened again in the early 20thcentury, there has only been 3 archbishops: Mar Gregorius PAULOS BEHNAM, Mar Severios ZAKKA IWAS who became the Patriarch Zakka IerIWAS and since 1980 Mar Severios HAWA, Baghdad’s current archbishop.

Since Islamic fundamentalism emerged and since Saddam Hussein’s regime fell, St Peter and St Paul cathedral has been twice the target of car bombing terrorist attack, which luckily caused no death.

Built by the engineer Joseph JARJIS, St Peter and St Paul cathedral is a large and wide church of more than 1 800 sq metres², north-east oriented.

It looks like a large hall, with no inside pillars or columns, and topped by a high sloping two-parts ceiling.

Resolutely modern, St Peter and St Paul Cathedral still presents the 3 basic components of Syriac architecture: the lower church for the worshipers (the nave), the medium church for the deacons who sing the Lord’s glory (the choir) and the higher church for the priests and bishops (the sanctuary).

The cathedral’s sanctuary comes apart from the nave and the choir, separated by a 4-pillars royal gate, adorned with great curtains, embroidered with glorious crosses, that can be opened or closed according the different liturgical phases.

Right in the middle, in front of the sanctuary, a beautiful Gospel book stands on the Golgotha, with a hammered golden metal front cover featuring Jesus Christ crucified.

The sanctuary has 3 altars. The high altar with steps is east oriented and backed onto the apse’s wall. Just above the high altar, a large painting of the Christ’s crucifixion can be admired. Two very simple side altars stand in the side-aisles.

The sanctuary’s centre is crowned by a bulb-shaped dome, featuring the heavenly vault just above the high altar.

On each side of the sanctuary are two rooms: the sacristy on the left and the baptistery on the right. Both access doors are topped by huge identical paintings showing the Nicene Creed, written in Arabic.

In the centre, all along the lintel of the royal gate, the “Our Father” prayer has been carved by the artist Abdel GHAFFAR MAL’ALLAH in 1982.

Beautiful chandeliers hang from the ceiling to enlighten the whole church. The side walls present stain-glassed windows which let the natural daylight get through from sunrise to sunset.

There are several tombs within the cathedral. Among them, Mar Gregorius PAULOS BEHNAM’s tomb, deceased in 1969, and also Father Yousef ABDEL ABOUDI’s, murdered on April 5th, 2008.

On the left church’s wall, 3 identical commemorative plaques can be read in English, Arabic and Syriac languages, about the great donor Abdul Majid ZAYOUNA, murdered on April 5th, 2008.

At the other end of the nave, a tribune has been added, on the whole width of the building.

A bell tower rises above the southwestern part of the church.

Next to St Peter and St Paul cathedral, the Syriac-Orthodox archbishopric was built in 1975, under the Patriarch Mar Ignatius Zakka IWAS, who was the former bishop of Baghdad and who was followed by the current titular bishop Mar Severios HAWA.

Facing the cathedral stands a modern building where priests are accomodated, and which also hosts a 320 sq metres room, named after the Patriarch BARSOM and used for social and religious events or activities.

Another building adjoins the archbishopric, created by the engineer Bassim Matti al Qas, with a most original architecture. It looks like a dome directly placed on the ground. The inside, in a smoothly lit atmosphere, favourable to prayer, hosts a nice little chapel.