Church of Mary mother of sorrows in Baghdad (Om Al-Ahzan) 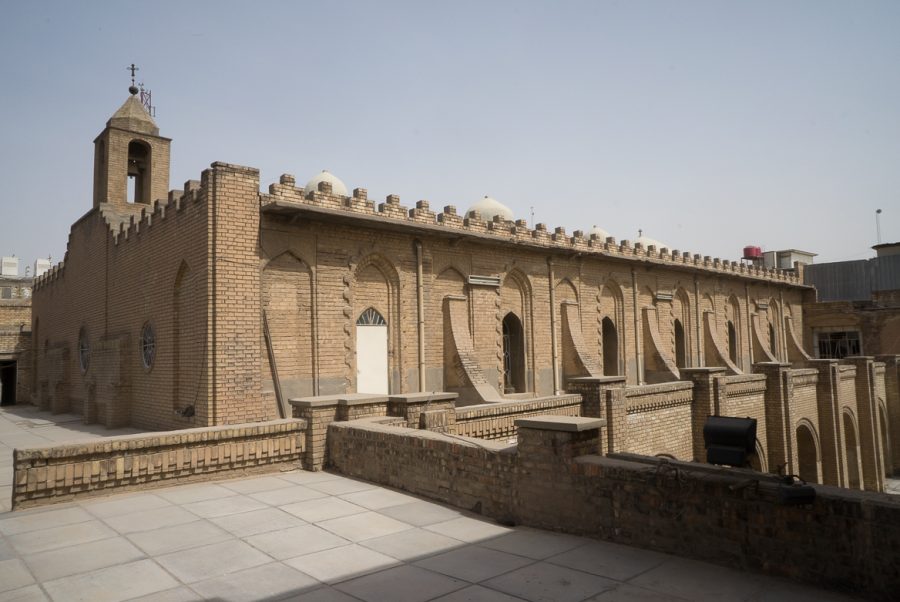 The primitive church had been built in 1843. Erected on a low area of Baghdad, often flooded by the Tigris River and the rise in the underground water level, the church had to be rebuilt and enlarged 5 metres higher in 1889. In the 1950s, the church Um-Al-Ahzan started to lose its influence as the local population was gradually moving away from this old district to a more modern area in Baghdad. The church is called Um-Al-Ahzan, Mary Mother of Sorrows, as depicted on an outstanding painting hanging on apse’s wall.

The Chaldean church Um-Al-Ahzan (Mary Mother of Sorrows) is located in Baghdad at 33°20’17.30″N 44°23’43.90″E and 44 metres above sea level, on the eastern bank of the Tigris River, in the Shorja district, in Aqd-Al-Nasara. It is one of Baghdad’s oldest districts, where thousands of Christian families used to live in.

To access the church Um-Al-Ahzan, you need to go through a large market, where shopkeepers take all the available space, including along the church’s wall, when not even inside the church to store whatever could be stored in there. The estate property of the church Um-Al-Ahzan is very much coveted because of its central position with a strong business and shopping environment.

Since its foundation in 1843, this church is called Um-Al-Ahzan, that is to say “Mother of Sorrows”. At the times of its reconstruction and consecration in 1898, Patriarch Mar Abdisho V Khayat kept this original name instead of naming it after the traditional apostles of the East (Mar Toma, Mar Addai and Mar Mari) as Patriarch Elya XIV Abbo Alyonan preferred when he laid the foundation stone 9 years earlier. This naming is indeed being confirmed in an outstanding painting hanging onto the apse’s wall and representing the “seven wounds of the Mother of God”.

The origins of the Chaldean Church

The Chaldean Church is a Catholic church, born in the 16th century, further to a schism that occurred within the Church of the East. In 1552, several bishops, who had set up in northern Iraq, southern Turkey and northern Iran[1], contested the hereditary succession of the Catholicos of the Church of the East Shimun VIII. They elected in Mosul another Patriarch, Yohannan Sulaqa, abbot of Rabban Hormizd Monastery in Alqosh, who named himself Yohannan/John VIII. He went to Rome to profess his Catholic faith. On April 20th 1553, Pope Julius III consecrated him Patriarch of the Catholic Chaldean Church, “making thus the birth of the Church official from then on[2]”.

Back in the Ottoman Empire, he set up his patriarchate in Diyarbakır (southeast of modern days Turkey), 400 kilometres northwest from the monastery of Rabban Hormizd. Fighting openly with his rival Shimun VIII, Yohannan Sulaqa was arrested, imprisoned and murdered in 1555.

The foundation of the Catholic Chaldean Church had been preceded a century earlier, in 1445, by a decree of union in Cyprus between Rome and some members of the Church of the East, that Pope Eugene IV already called “Chaldeans”.

Until the 19th century, the schism was all the more source of conflicts as a large number of worshippers of the Church of the East chose to remain united with Rome.

The Catholic Chaldean Church’s see was transferred from Diyarbakır to Mosul in 1830, before the Metropolitan Yohannan VIII Hormizd was elected as Patriarch. It was afterwards transferred to Baghdad in 1950, under Mar Yusef VII Ghanima.

Though they undisputedly counted as the majority among the estimated 1 200 000 Christians in Iraq before the first Gulf war in 1991, the Chaldeans number 750 000 in the last census in 1987, compared to 300 000 Assyrians (Church of the East and former Church of East). The total number of Christian people in Iraq amounted then to 8% of the total population.

And in 2018, how much are they? The local correspondents of Mesopotamia organization have collected some information which confirms that the number of Christians has collapsed, as already mentioned during the different visits in local communities. It is far less than 400 000 Chaldeans that are said to be still living in Iraq, split between Baghdad, Kurdistan, the Nineveh plain and Basra. Actually, the horrors endured by Christian communities never stopped since the Iraqi independence in 1933. The beginning of the 21st century had actually offered them no break with the American invasion in 2003, the terrible embargo imposed by the UN, and the violence and persecution from Islamic and mafia groups that targeted the Christian communities since the fall of Saddam Hussein’s regime.

The Catholic Chaldean Church today counts an important diaspora, scattered over the five continents: in the USA, in Europe, in Australia, in Canada, in New-Zealand, in ex-USSR: more especially in Russia (Moscow, Rostov-on-Don), in Ukraine, in Georgia (Tbilisi), in Armenia (Yerevan).

[1] In the 16th century: the Ottoman Empire and Persia.

History of the church Um-Al-Ahzan

The primitive church Um-Al-Ahzan was built in 1843. The ever growing population and the needs of the Chaldean community led to the building of a new and larger church at the end of the 19th century, that could sit around 2 000 persons.

For the construction of this new church, the negotiations and steps were undertaken under the authority of the Chaldean Patriarch Yousef (Joseph) VI Audo, but were stopped when he died in 1878.

Petros Elya XIV Abbo Alyonan, Patriarch of Babylon for the Chaldeans laid the church’s first foundation stone on March 17th, 1889. He died from typhoid on June 27th, 1894, before the church was finished. Mar Abdisho V Khayat succeeded him and inaugurated the church on November 27th, 1898.

During the 1950s, the church Um-Al-Ahzan’s influence started to decline, with regards to the local population leaving progressively this old district of Aqd-Al-Nasra to move and settle into more modern areas of Baghdad. Today, there are only but 120 Christian families left in that district.

Erected on a low area of Baghdad, often flooded by the Tigris River and the rise in the underground water level, the church’s structure had weakened considerably. Patriarch Paulus II Cheiko started a big restoration programme. The church’s floor had to be rebuilt 5 metres higher in 1889 and a drainage system had to be installed.

Although only few masses and services are celebrated there nowadays, the church Um-Al-Ahzan used to be the Chaldean cathedral for Baghdad. It has been completely restored and renovated by the Patriarch of Babylon for the Chaldeans Louis Raphael I Sako in 2015.

Description of the church Um-Al-Ahzan

The Chaldean church of Um-Al-Ahzan is a beautiful terra cotta building, following an ancestral and typical construction method in Mesopotamian style, which was used until last century to build houses, mosques, churches and palaces in Baghdad. The very thick walls helped keeping in coolness in the summer and heat in the winter.

A modest sign above the outside gate shows the way into the religious compound. Getting through this surrounding wall gives access to a courtyard, which used to be a cemetery and at the end of which, on the back wall, some tombstones can still be observed, engraved with inscriptions in Arabic and French. The southeast corner of this courtyard is adorned by a copy of the grotto of Our Lady of Lourdes, as it is often the case in most Catholic (Chaldean or Syriac) churches in Iraq.

The church Um-Al-Ahzan, when seen from the inside, presents an ensemble of pillars and arches in Mosul marble. These materials were carried to Baghdad by keleks, rafts of inflated goatskins that used to go down the Tigris River. The whole structure makes up a building with one nave and 2 side-aisles, with the sanctuary taking up the whole southeastern width of it. There is here no royal door separating the nave from the sanctuary as it usually is the case in ancient Assyrian-Chaldean churches, but only simple altar rails.

The holy of holies consists in a double altar in the centre, topped with a cupola and two side altars, both topped with cupolas also. In its central part, the ancient high-altar backs onto the apse’s wall. It is a wooden, beautifully carved and decorated, high altar. In gothic style, it has been crafted by Polish soldiers who arrived in Baghdad during WW2.

There is also another simple and modern free standing altar, also made of wood, placed right in the middle of the sanctuary and facing the worshippers, according to the tradition in Catholic churches since the Second Vatican Council.

On the apse’s wall, above the ancient altar, hangs an outstanding painting, depicting the “seven wounds of the Holy Mother of God”. Its dedication and origin‘s indications are hammered in a cartouche in the lower part of the frame. The Arabic calligraphy indicates that it comes from Diyarbakır (southeastern modern Turkey) and that it had been transmitted (offered or made) by a man named Elias Gorgis in 1899.

Both side-aisles of the church, narrower than the nave, are topped by a range of 6 small cupulas, supported by squinches, in shape of muqarnas (honeycomb structure).  This is quite typical of Abassid and Persian architectural and ornamental styles.

Offering an outstanding acoustics’ quality, the church Um-Al-Ahzan also presents a wooden carved pulpit, backed onto the right-side pillar ending the altar rails, which is all the more unusual in traditional architecture of Mesopotamian churches and reveals the influence of the Roman Catholic Church.

Very close to the sanctuary, on either side, several gravestones can be observed. The most important one is the tomb of Patriarchs Abdisho V Khayat and Paulus II Cheikho. Bishop Mickael Naamo, who took a large part in the building of the church, and Father Mickael Baho and Father Youhanna Maqsoud are also buried there.

Outside the church Um-Al-Ahzan, on either side of the building, the northern and southern walls are adorned with bas-relief in brick, representing ancient crosses, mostrances and other religious ornaments.