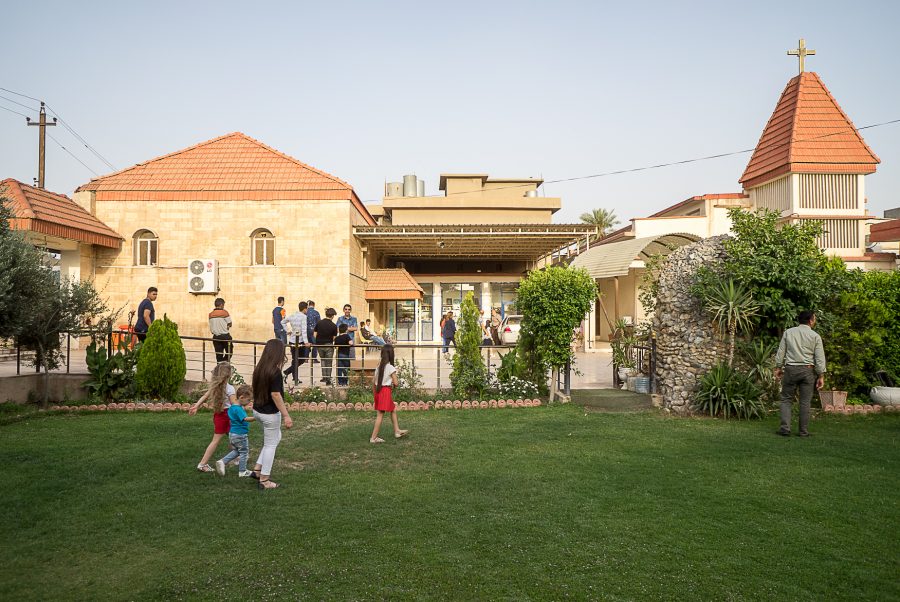 The first known bishop of Kirkuk was Theocritus. He exercised his apostolate at the start of the 2nd century between 117 and 138. The Christian history of Kirkuk was marked by the persecution perpetrated by the Sassanid King Yazdegerd II, in 445, who executed 12,000 Christians and the entire hierarchy of the local church.

The ancient church dedicated to Mariam al Adra (Virgin Mary of the Immaculate Conception) was built in 1862, under the reign of Pope Pius IX, the Patriarch Joseph Audo and the Metropolitan Yohanna Tamras, eight years after the same Pope proclaimed the dogma of the immaculate conception. The new church of the same name was built on an adjacent plot in 1965.

Kirkuk, the provincial capital, is located to the east of the Little Zab. The Khasa river, a seasonal tributary of the Tigris, passes through the east side of the city.

Situated to the north-east of Iraq, the region where modern-day Kirkuk is located was known in ancient history as Bét Garmaï, formerly inhabited by the Garameans, possibly originating from “a Persian tribe which came to the region prior to Islam”[1], but also possibly Ninevites and Chaldeans who spoke “Aramean certainly.”[2]

Map of the Middle-East and South-Caucasus.
© Journal France-Arménie
The Mariam al Adra church in Kirkuk. Entrance.
May 2018 © Pascal Maguesyan / MESOPOTAMIA

The vast majority of the 1.2 million strong population of Kirkuk are Kurds. The rest of the population is made up of Turkmen (Shia and Sunni), Arabs (Sunni) and Christians (mainly Chaldean and a very small proportion of Armenians).  There also used to be a Jewish community in the city, which no longer exists. In 2018, there are thought to have been 5,000 Chaldean Christians in Kirkuk out of the 7,000 across the whole diocese.[1]

A major oil-producing hub in the north of Iraq, sectarian tensions flared in Kirkuk at the turn of the 20th and 21st centuries and were exacerbated in the 1990s by the first Gulf war and the fall of Saddam Hussein’s regime in 2003. Massoud Barzani, former President of the autonomous region of Iraqi Kurdistan, laid claim to the city which was protected by Kurdish Peshmerga in June 2014 when the ISIS tried to take the city.

The referendum on the independence of Iraqi Kurdistan, which took place on 25th September 2017, included the province of Kirkuk, but by 16th October the Iraqi armed forces and associated paramilitary groups had retaken military and political control of Kirkuk.

Fragments of the Christian history of Bét Garmaï and Kirkuk

Christianity came very early on to Bét Garmaï, as part of the evangelisation of Mesopotamia by the apostle Saint Thomas and his disciples Addai and Mari.  The tradition names the first known bishop of Kirkuk as Theocritus[1]. Most likely originally from the Graeco-Roman world, he may well have sought refuge in Persia and dispensed his apostolate in Kirkuk at the very beginning of the 2nd century, between 117 and 138.[2]

In the History of Karka[3] “the most ancient Christian sanctuary in the city would be the church built on the site of the house of Joseph, the first convert of Mār Māri.” [4] All traces have been lost of this sanctuary, which was not located inside the citadel of Kirkuk, but two kilometres away in Koria, today a district of the metropolis.

The Christian history of Kirkuk was marked by the persecution perpetuated by the Sassanid king Yazdegerd II, in 445, which caused “not only 12,000 deaths, but [also the loss of] the entire hierarchy.” [5] At war with the Eastern Roman Empire, converted to Christianity, the Persian king considered Christians to be enemies of the kingdom and stepped up the imposition of Zoroastrianism across the empire. Six years after the martyrdom of the Christians of Kirkuk, he committed his troops to fighting against the Armenians who he defeated in the Avarayr plain. In this case as in the precedent, Yazdegerd II not only failed to eliminate Christianity from the Persian Empire, but also started the cult of martyrs which is still today an essential part of Mesopotamian Christianity.

On the death of Yazdegerd II, the Christians of Kirkuk erected a large martyrion and began a commemorative service to “perpetuate the memory of the triumph of the victims.” [6] This large martyrion, located on the hill of Tahmazgerd, to the east of the citadel is now the most ancient Christian site visible in Kirkuk. The primitive church is believed to have been built here in the year 470, although it was not until the year 1607 that the presence of a “monastery” in Tahmazgerd was attested to.

The Monophysite Christians (Syriac) of Bét Garmaï then had to fight against the intolerance of Barsaume, the Nestorian Metropolitan of Nisibe (Nusaybin), at the end of the 5th century, around 484/485. Those who refused to turn to Nestorianism, who resisted, were killed or forced to flee.  Throughout the centuries and repeat crises, Nestorianism remained predominant in Bét Garmaï up until the constitution of the Chaldean church, in communion with Rome in 1553, which is said to have been popular with the Christians of Kirkuk very early on, although a fully-fledged local Chaldean church did not emerge until the 18th century.

[3] Karka is the ancient Syriac name for modern-day Kirkuk

The ancient Mariam al Adra (Virgin Mary of the Immaculate Conception) was built in 1862 “on a plot of land gifted by Georgis Oraha, a Christian inhabitant of the old village of Koria”[1] which was at that time located two kilometres from the Kirkuk citadel, and 200 metres from the place known as Tépé Mulla Abdullah al Aali, where one of the very first churches in the Kirkuk / Koria agglomeration may well have been located. This church was also named after the Virgin Mary and was visited by the Dominican missionary Jacques Rhétoré in 1878.

On the south wall of the ancient Mariam al Adra church (Virgin Mary of the Immaculate Conception) is a severely damaged marble plaque with a dedication inscribed in Syriac. It reads: “this Chaldean church was built in the name of the Virgin Mary of the Immaculate Conception, under the reign of Pope Pius IX, Patriarch Joseph Audo and the Metropolitan Yohanna Tamras, in 1862.”

This dedication follows on from the proclamation of the dogma of the Immaculate Conception by Pope Pius IX on 8th December 1854, whose papal bull established as a truth of the faith that “the most Blessed Virgin Mary, in the first instance of her conception, by a singular grace and privilege granted by Almighty God, in view of the merits of Jesus Christ, the Saviour of the human race, was preserved free from all stain of original sin…”

The construction of the Chaldean church Mariam al Adra in Kirkuk (Koria district) also came four years after the visions of the young Bernadette Soubirous of the Virgin Mary in Lourdes, in 1858, which were officially recognised by the diocese of Tarbes in January 1962 and had an international impact.

Undoubtably, the construction of the Mariam al Adra Chaldean church in Kirkuk took place against a backdrop of fervent devotion to the Virgin Mary in the Catholic church and across the world.

Moreover, this church was built three years before the Chaldean cathedral Om al Ahzane (Mother of Sorrows) in the citadel of Kirkuk which was also dedicated to the Virgin Mary in 1965.

“In 1924, following the unrest caused by the British army’s occupation of Kirkuk, the inhabitants of Koria were forced to leave their homes and take refuge in the citadel. The church was looted and was used as an enclosure for animals for three months. When things calmed down, the inhabitants returned to their homes and the church was restored.”[2]

A century later, in 1965, a modern church of the same name, but much more spacious, was built next to the old church. It was built thanks to a donation from Agabi Djerjian, the widow of Ibrahim Kolchi, and her sister Lucy. [3]

[3]A headstone in the new Mariam al Adra church commemorates the donation of Agabi Djerjian, the widow of Ibrahim Kolchi, and her sister Lucy. It is embedded in the right-hand wall, close to the sanctuary.

The surface area of the ancient Mariam al Adra (Virgin Mary of the Immaculate Conception) is 112m2 (8m /14m).

The ancient church was built of stone and Mosul marble, coated with moulded plaster. Its basilica-structure with two parallel naves, mounted with two rib vaults supported by four thick freestanding marble octagonal pillars, as well as load-bearing pillars in the wall. The walls are perforated with small windows at height. At the end of the dual nave, the sanctuary is accessible after passing through two single doors forming an arch, which no doubt originally would have been closed off by a liturgical curtain. The two altars in the sanctuary are mounted with cupola.

This church has been renovated and restored several times. The ground level was originally lower than its present height. The tiled gable roof covers the whole of the building.

As for most Christian buildings in Mesopotamia, the Mariam al-Adra church in Kirkuk is extremely sober in terms of the decoration and ornament.

Next to the ancient Mariam al Adra church built in 1862 is the modern church, built in 1965, at the time of archbishop Rafaël Rabban, the same year as the major reforming Vatican 2 council closed. Resolutely modern, built from reinforced concrete, this vast church is a hall imitating a triple nave, supported by eight freestanding pillars covered in woodwork.  The side walls are perforated with bay windows. There is a platform for the choir above the only entrance door to the church, in the facade aligned with the sanctuary. The sanctuary is entirely open and is raised by three steps. An arch with no inscription or decoration opens up onto the sacred space.

A headstone on the left-hand wall of the new church, close to the sanctuary, commemorates the bishops and chorbishops buried under the altar.

The two churches, ancient and modern, today form a single religious space that is perfectly maintained and incorporates a beautiful garden.

There is a cave dedicated to the Virgin Mary in the centre of the estate which attracts not only Chaldean worshippers but also numerous visitors from all communities which worship the Virgin Mary.

Several major annual feast days of the Virgin Mary are celebrated at the Mariam al Adra church (Virgin Mary of the Immaculate Conception). These include the feast day of the Immaculate Conception on 8th December, and 31st May to close the month dedicated to May. On this occasion, the bishop of Kirkuk celebrates mass and leads a procession with an icon of the Holy Virgin.

The vitality of the Chaldean community in Kirkuk owes a lot to the apostolate of its archbishop, Monsignor Yousif Thomas Mirkis, who deploys numerous pastoral, social and economic initiatives in order to stabilise the Christian presence in this city and region.