The Deir Mariam Al-Adra (Virgin Mary, Immaculate Conception) is located in the centre of Sulaymaniyah, the second largest city in Iraqi Kurdistan, close to the Iranian border, at 35°33’12.9 N, 45°26’45.7 E and 851 metres’ altitude. 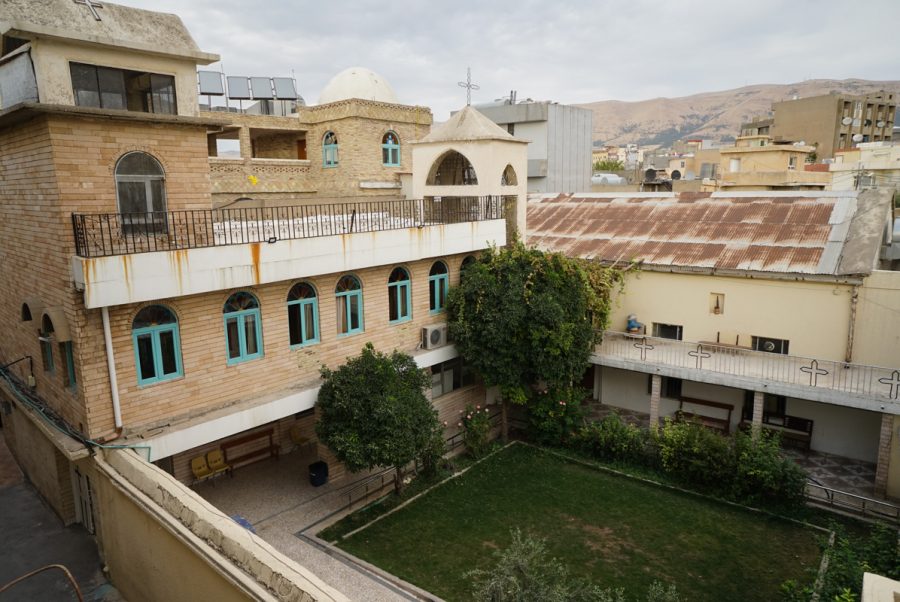 The construction of the Chaldean Mariam Al-Adra (Virgin Mary, Immaculate Conception) church in Sulaymaniyah, was undertaken against a historic backdrop of intense devotion to the Virgin Mary in the Catholic church and a desire for a Chaldean revival in Iraq. In 2012, Deir Mariam Al-Adra in Sulaymaniyah became a monastery church for the Al-Khalil community, a community dedicated to closer relations between Christians and Muslims, founded in 1991 by the Italian Jesuit Paolo Dall’Oglio.

Faithful to its vocation, Deir Mariam Al-Adra proposes events, conferences and educational activities for children, teenagers and young adults of all religions and denominations: Christian, Muslim and Yazidi.

The monastery is composed of several different buildings and facilities both ancient and modern, linked to each other by a cloister and passageway. Numerous civil society and religious organisations, both Iraqi and European, contribute to maintaining this living heritage, activities, and projects.

At the heart of old Sulaymaniyah, the Deir Mariam Al-Adra monastery stands in the old quarter of the Sabunkaran (Sabunkhan), the soap-makers quarter.

Deir Mariam Al-Adra, the monastery of the Virgin Mary in Sulaymaniyah, with a view of the city
October 2019 © Pascal Maguesyan / MESOPOTAMIA

Fragments of history and demographics

Built in 1784 by Ibrahim Pacha, a Kurdish-Ottoman leader, Sulaymaniyah was the capital of the Kurdish Emirate of Baban, renowned for having been a Kurdish cultural and artistic hub.

A relatively young city, Sulaymaniyah is only 5 km north-west of the Kunara site, where French archaeologists discovered a rich, ancient Mesopotamian city dating back over 4,000 years, revealed during a series of digs between 2012 and 2018.[1]

The Kurds and Muslims constituted almost the whole population of Sulaymaniyah, which in 2008 was estimated at 700,000 inhabitants. The large Jewish community has now entirely disappeared. Almost 3,000 Christians of all denominations still live in Sulaymaniyah. They are both of Iraqi (Assyrians, Chaldeans, Syriac Orthodox and Catholic, Armenians) and foreign origins (Egyptians, Ethiopians and Eritreans, Filipinos and Indians). Amongst these non-Iraqi Christians, there are also 200 protestants who arrived with the UN agencies. Lastly, it is important to note that there are around one hundred Kurds who have become Evangelical Christians, although this remains a tiny, marginal proportion.[2]

[2] Source Jens Petzold, Prior of the Deir Mariam Al-Adra monastery.

The construction of the Chaldean Mariam Al-Adra (Virgin Mary, Immaculate Conception) church in Sulaymaniyah, took place against a historic backdrop of intense devotion to the Virgin Mary in the Catholic church and a desire for a Chaldean revival in Iraq.

The church of the same name has the same architectural characteristics as the one built in the same year in Kirkuk [1], under the reign of the Chaldean Patriarch Joseph Audo and Pope Pius IX who, eight years prior, on 8thDecember 1854, introduced the dogma of the Immaculate Conception. This construction also came four years after the young Bernadette Soubirous saw the Virgin Mary at Lourdes in 1858, an event which had considerable international ramifications

Embedded in the exterior wall of the Mariam Al-Adra church in Sulaymaniyah, an engraved plaque bears the inscribed dedication in Syriac.

The church was damaged during the First World War.

In the 1960s, the Chaldean community in Sulaymaniyah undertook work to modernise and expand the Mariam Al-Adra church. This work modified the original three-nave structure and central pillars. The roof was transformed and a metal roof installed (hot in summer and cold in winter).

[1]See the file on the Mariam Al-Adra church in Kirkuk.

In 2012, the Mariam Al-Adra parish church in Sulaymaniyah became a monastery church for the Al-Khalil community, a community dedicated to closer relations between Christians and Muslims, founded in 1991 by the Italian Jesuit Paolo Dall’Oglio.  Ordained as a priest in the Syriac-Catholic church, he began his work in 1984 by breathing new life into an abandoned Syriac-Orthodox 6th century monastery, Deir Mar Moussa al Habachi (the monastery of Saint Moses the Abyssinian) to the north-east of Damas, in Syria.  Over time, this magnificent monastery became a centre of inter-faith dialogue and before the Syrian civil war it welcomed in pilgrims and visitors from the world over.

The war forced Paolo Dall’Oglio to leave the Mar Moussa monastery and Syria. He was then welcomed to Iraq, in Sulaymaniyah, by the Chaldean Patriarch Louis Raphaël I Sako and at the end of 2012, he re-founded the Al-Khalil community and monastic life at Mariam Al-Adra.

After returning clandestinely to Syria, Paolo Dall’Oglio disappeared in Raqqa on 28th July 2013. Since then, the Mariam Al-Adra monastery has been run by one of his companions, Father Jens Petzold, known as Abouna Yohanna, an Arabic-speaking Swiss brother.

Life at the Mariam Al-Adra monastery

The Mariam Al-Adra monastery is made up of several different buildings and facilities, a mix of ancient and modern, connected via a cloister and passageway: the Mariam al-Adra church itself built in 1862, a presbytery, a house for the monks and male guests, a house for the nuns and female guests, as well as multi-purpose spaces for activities, meetings and celebrations. Emergency accommodation was also set up in 2014 to welcome in Christian and Yazidi families forced out of their homes by ISIS.

Numerous civil society and religious organisations, both Iraqi and European, contribute to maintaining this living heritage, activities, and projects.