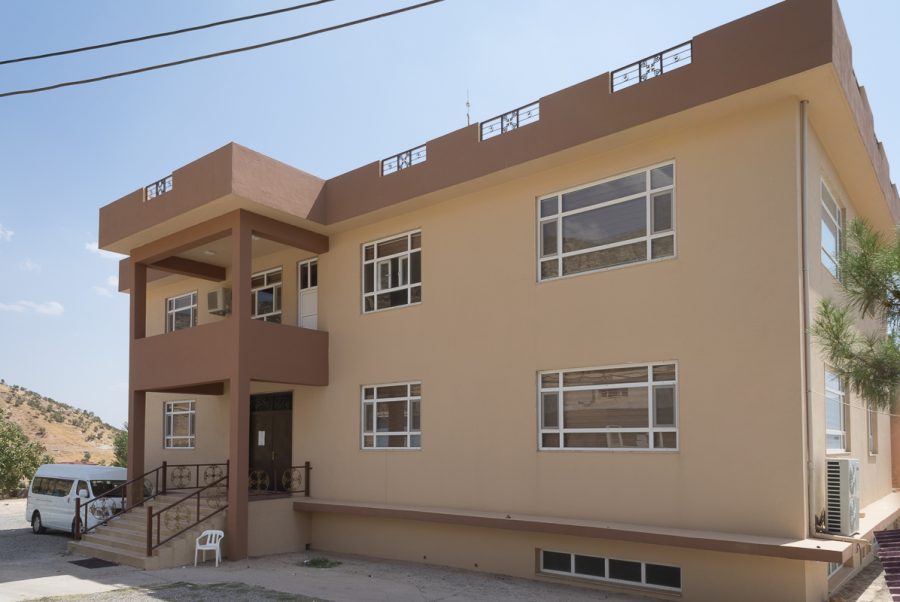 Known for its caves and small lake, Inishk is located 78 km east of Zakho, 4 km east of Araden, 17 km west of Amadia and 50 km north-east of Dohuk-Nohadra.

The village is relatively close to the Turkish border at 20 km to the south, but 86 km by road to the east to the Ibrahim border crossing.

Known for its caves and small lake, Inishk is located 78 km east of Zakho, 4 km east of Araden, 17 km west of Amadia and 50 km north-east of Dohuk-Nohadra.

The village is relatively close to the Turkish border at 20 km to the south, but 86 km by road to the east to the Ibrahim Khalil border crossing.

The Christian history of Inishke is very similar to that of other villages of the area. Pre-existing Jewish presence and early evangelization under the influence of apostles Thomas, Addai (can also be the apostle Jude, also known as Thaddeus in the Gospel) and Mari. Throughout a 4th century full of vocations, the tradition relates many stories of martyrs persecuted by the Persian king Shapur II.  Throughout this period, hermitages and primitive sanctuaries developed, at the very same place where Assyrian churches and monasteries progressively raised. Throughout the centuries and until the fall of the Ottoman Empire, the valleys and the mountains which edge this part of Mesopotamia were a place of flourishment and protection for the Church of the East, on both sides of the nowadays Iraq-Turkey border. Inishk was the last of all the villages in the Sapna valley, former members of the Holy Apostolic Catholic Assyrian Church of the East, to join the Chaldean church.

This community and denominational context was overturned at the end of the 19th and start of the 20th century with the persecution of the Kurds, the implementation of Seyfo[1]by the Young Turks and the dismantling of the Ottoman empire.

During all the rest of the 20th century, and although the Iraqi administration took the lead from 1921, the Chaldeans had no respite. Between 1961 and 1991, the successive wars which opposed the Iraqi government and the Kurdish peshmerga weighed heavily on the Christian communities and their heritage. In September 1961, at the start of the war opposing the Iraqi government and the Kurdish peshmerga, Inishk was set alight and the villagers were forced to settle in large cities. Access to this mountainous area was prohibited from 1961 to 1970. After the peace agreement signed on 11 March 1970, the inhabitants of Inishk started to return. However, the population continued to shrink and grow as the conflict developed. It reached a new low in 1988 during operation Anfal when numerous villages in the region were bombed with chemical weapons. In the second half of the 1990s, after the Gulf war and the progressive emergence of an autonomous Kurdistan, the Christians of Kurdistan returned to their home villages. This phenomenon intensified from 2003 onwards, with the fall of Saddam Hussein and the new wave of anti-Christian persecution by criminal, Islamicist groups. This led to the reconstruction of Inishk, along with all the Christian villages under the authority of the regional government of Iraqi Kurdistan. In Inishk, sixty-nine houses were built and 38 restored.

[1]Seyfo is the Syriac name for the Assyrian Chaldean and Syriac genocide in the Ottoman Empire in 1915-1918.

Fragments of a hagiography

In the great book of martyrs of the Church of the East, Mart Shmoni has an important place. The hagiography of Mart Shmoni and her seven saint children is very well known throughout all the Christian East in Mesopotamia. The story of this Jewish family is related in chapter 7 of the second Book of the Maccabees. It reveals how the Jewish were persecuted under the reign of the Seleucid king Antiochus IV Epiphanes, because they respected the Laws of God and already believed in resurrection and eternal life… two centuries before the advent of Christianity.

The seven Maccabees brothers were then “arrested with their mother and forced to eat pork[1]” in order to abjure their faith. They all refused and died as martyrs one after another in front of their mother’s eyes.  The eldest was “horribly tortured then placed on a grill (…)”[2].  Despite her distress, their mother Mart Shmoni encouraged them to remain faithful to God’s Law right up until the youngest, who she begged not to fear the executioner “but to show yourself worthy of your brothers, accept your death so I might find you with them in the mercy of the Lord.”[3]

History and description of the Mar Shmoni church in Inishk

There are two churches in Inishk. The first, and most ancient, Mar Gorgis (Saint Georges the martyr) was built in old Inishk which was located to the south of the present-day village. It is attested to as of 1728 in a hymn book[1]. The second, Mart Shmoni, was built in the new village in 1885 by the bishop of Amadia, Monsignor Cyriaque Georges Goga.

In 2010, the only parts of the first Mart Shmoni church Professor Amir Harrak could identify were the arch of the sanctuary and a pile of stones. The only other remaining trace of the building is a commemorative inscription dated 1885. Engraved in estrangela Syriac on a polished stone of 46/33 cm, it is in the possession of the family of the former mayor of Inishk, Yaldā Čōpē[2].

It tells us that the Mart Shmoni church was built in 1885, at the time of Pope Leo XIII, the Chaldean Patriarch Mar Eliyya XIV Abo-Alyonan and the apostolic delegate, the Dominican Henri Altmayer who financed the construction of this building.

Although almost nothing remains of the 1885 church, the second Mart Shmoni was built at the very end of the 20th century for families originally from Inishk who had returned to the village. This small, single nave, longitudinal church with a terrace roof is a model, charmless hall. It is already damaged and poorly adapted to the spiritual needs of the Chaldean community. This is why a third Mart Shmoni church was built after 2010, opposite the second church. It occupies the ground floor of a modern two-storey building which in no way resembles a religious building, but a bell has been fitted to the roof.  This is the building in which the Chaldeans of Inishk celebrate mass and the sacraments.

Mart Shmoni is celebrated here on 1st May.