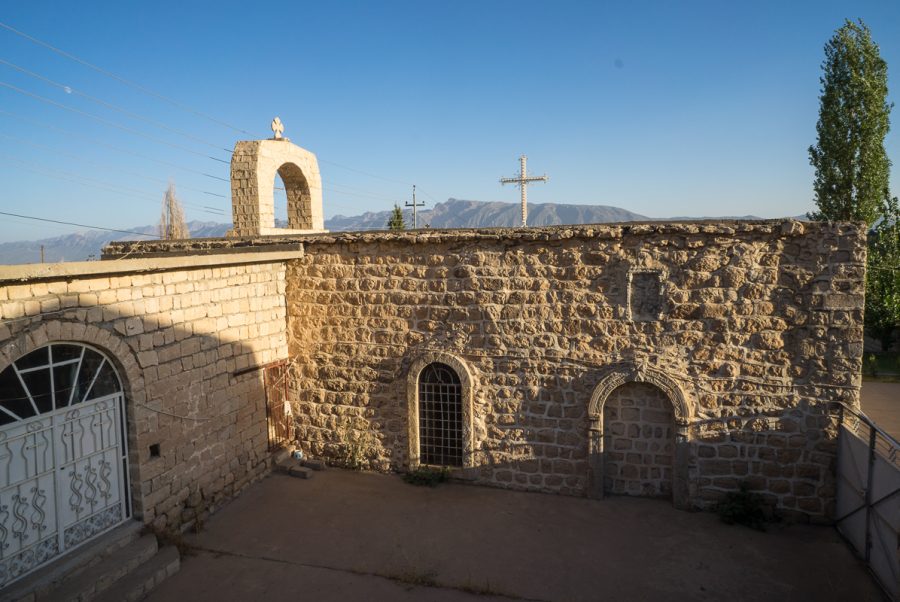 The Christianisation of Araden is comparable to that of other villages in the region: there was pre-existing Jewish community and early evangelisation by the apostles Thomas, Addai (Thaddeus) and Mari. The hagiography of Mart Shmoni and her seven saintly children is very well known throughout all the Christian East in Mesopotamia. The tale of the martyrdom of this Jewish family, the Maccabees, is found in chapter 7 of the Second Book of Maccabees. This account reveals how the Jewish were persecuted under the reign of the Seleucid king Antiochus IV Epiphanes, because they respected the Laws of God and already believed in resurrection and eternal life… two centuries before the advent of Christianity.

The church was renovated (rebuilt) in 1935. The building is made of natural quarry stones with mortar joints.

The Mart Shmoni church in Araden lies at 36°27’4.08″N 43°20’54.07″E and 1,143 metres altitude and is located at the heart of the village. It lies at the heart of the Sapna valley, between Mount Chamantine to the north and Mount Kara to the south, which both stand at 3,000 metres altitude. The Mart Shmoni church is located less than a kilometre north of the Soultâne Mahdokht church, 21 km west of Amadiya, 75 km east of Zakho and 20 km south from the Turkish border. Araden is therefore a sensitive geopolitical area, but it is also a beautiful land, where many fruit and nut bearing trees and non-fruit bearing trees flourish, where pastureland, gardens and rice fields flourish, irrigated by several water springs. Literally, in Syriac language Araden means “Garden of Eden”, which says a lot about the beauty of the place[1].

Of all the Christian villages along the Sapna valley, Araden is one of the most important. From an administrative point of view, it depends on the Dohuk-Nohadra governorate and the district capital, Amadiya.

Mart Shmoni church at the bottom of the village of Araden.
September 2017 © Pascal Maguesyan / MESOPOTAMIA

The Christian history of Araden is very similar to that of other villages in the area[1], with a pre-existing Jewish presence and early evangelization under the influence of apostles Thomas, Addai (possibly also the apostle Jude, also known as Thaddeus in the Gospel) and Mari. Throughout a 4th century full of vocations, the tradition relates many stories of martyrs persecuted by the Persian king Shapur II.  And all along these times of the first Christians, hermitages and primitive sanctuaries developed, at the very same place where Assyrian churches and monasteries progressively raised. Throughout the centuries and until the fall of the Ottoman Empire, the valleys and the mountains which edge this part of Mesopotamia were a place of flourishment and protection for the Church of the East, on both sides of the modern-day Iraq-Turkey border, where Catholic missions flourished as of the 17th century and in particular from the 18th century. This is how the inhabitants from Araden turned from the Church of the East to the Catholic Chaldean Church. The village even became a Chaldean episcopal place of residence[2].  In 1913, there were 650 Chaldeans[3]. Of the 17 villages in the Amadiya diocese, Araden was therefore the second largest in demographic terms, smaller than Mangesh, but larger than Tena and Amadiya. This community and denominational environment was uprooted at the end of the 19th and start of the 20th centuries with the persecution of the Kurds, the implementation of Seyfo[4]by the Young Turks, followed by the break-up of the Ottoman Empire.

During all the rest of the 20th century, and although the Iraqi administration took the lead from 1921, the Chaldeans had no respite. In 1957 Araden still reported 1,049 inhabitants, and before 1961 the village counted 200 homes for more than 350 families[5], the zone was evacuated and the access was even officially prohibited between 1961 and 1970 because of the war In 1971, around 80 displaced families[6]from Araden came back to the village, but in 1975, the war started again and forced most inhabitants to flee once more. This scenario repeated itself again in the 1980s. Even worse, in 1988, Araden was one of the many villages bombed and totally destroyed by the Baathist regime of Saddam Hussein. Hopefully, the churches of Araden, including Sultana Mahdokht church were spared, “thanks to the efforts of a few people who managed to negotiate with the army”[7]. After the end of the first Gulf War and after new persecutions against Christians committed by Islamist or mafia organisations, the old people from Araden came back in 1988, for yet another time, with their children and grandchildren. They started rebuilding their village under the protection of the regional government of Iraqi Kurdistan, with the active support of the great Assyrian donor Sarkis Aghajan and the participation of several international organisations for cooperation and development. The inhabitants who live nowadays in this “Garden of Eden” however have to face economic and social problems which encourage them to leave, not only within the national Iraqi borders, but now exclusively abroad.

[1]See the notice on the Mar Kuryakos Spiritual Centre in Kani.

[4]Seyfo is the Syriac name for the Assyrian Chaldean and Syriac genocide in the Ottoman Empire in 1915-1918.

Cross sculpted in the stone on the north facade of the Mart Shmoni Chaldean church in Araden.
September 2017 © Pascal Maguesyan / MESOPOTAMIA

Mart Shmoni has a special place in the great book of martyrs of the Church of the East. The hagiography of Mart Shmoni and her seven saintly children is very well known throughout all the Christian East in Mesopotamia. The story of this Jewish family, the Maccabees, is related in chapter 7, of theSecond Book of the Maccabees. This account reveals how the Jewish were persecuted under the reign of the Seleucid king Antiochus IV Epiphanes, because they respected the Laws of God and already believed in resurrection and eternal life… two centuries before the advent of Christianity.

The seven Maccabee brothers were then “arrested with their mother and forced to eat pork[1]” in order to abjure their faith. They all refused and died as martyrs one after another in front of their mother’s eyes. The eldest was “horribly tortured then placed on a grill (…)”[2].Despite her distress, their mother Mart Shmoni encouraged them to remain faithful to God’s Law right up until the youngest, who she begged not to fear the executioner “but to show yourself worthy of your brothers, accept your death so I might find you with them in the mercy of the Lord.”[3]

Painting of Mart Shmoni and her martyred children, hanging in the church in Araden.
September 2017 © Pascal Maguesyan / MESOPOTAMIA

History and description of the Mart Shmoni church in Araden

The Mart Shmoni church in Araden is part of a religious complex which contains a small garden of fruit trees.

The church was renovated (rebuilt) in 1935 at the time of Pope Pius XI, the Patriarch of Babylon of the Chaldeans Yousef VI Emmanuel II Thomas and Francis Dawid bishop of the diocese of Amadiya, which the village of Araden is part of.

The Mart Shmoni church in Araden is made of natural quarry stones with mortar joints. The quarry stones are visibly eroded. The inscriptions on the stone which have also been damaged were fortunately decrypted by Amir Harrak[1]. The stones have been rejointed.

The walled-up door with semi-circular arches on the north facade of the building is one of the last notable pieces of architecture from the time of its reconstruction. The keystone of the arch is sculpted with an Assyrian stone cross. The engraved inscriptions in Syriac are still partially visible on the abutments and voussoirs. Above this door, a highly damaged marble plaque, is also engraved with Syriac inscriptions.

A small parish hall has recently been built against the north-east wall of the Mart Shmoni church.

The church is entered through a door at the centre of the south facade. The Mart Shmoni church in Araden is built of two single-nave parallel chambers, separated by a wall through which they communicate via a door with a semi-circular arch. The two naves are almost identical. They are mounted with semi-circular barrel vaults. Each room is equipped with a sanctuary and altar with steps, separated from the nave by a royal door in natural stone which covers the entire height of the building. The first chamber is no doubt used as a narthex. The second chamber is the church itself. Here, there is a marble plaque, engraved with a funeral inscription in Syriac and Arabic, a tribute to Monsignor Francis Dawid, bishop of the diocese of Amadiya, born in Araden in October 1870, who died in October 1939.