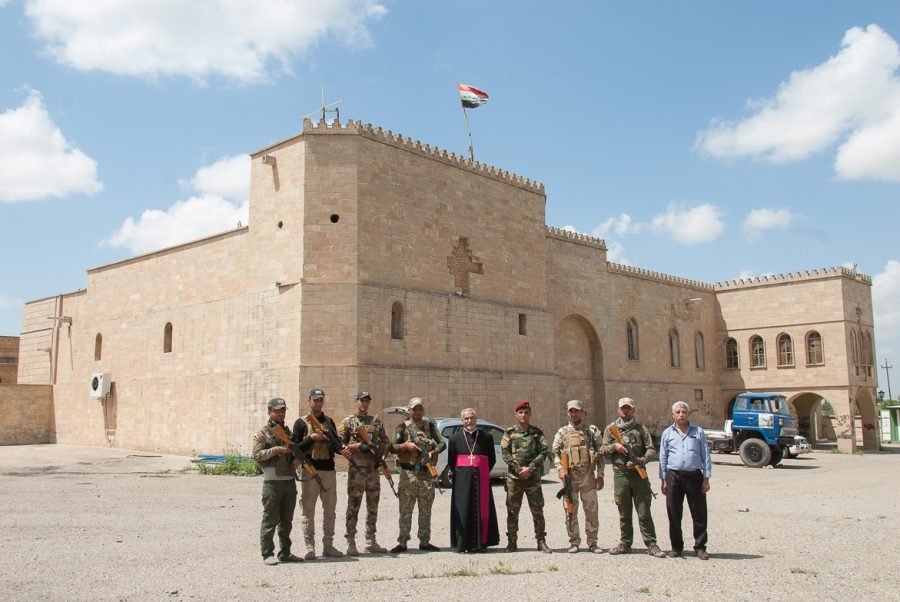 The justification of its foundation is entirely included in the story of martyrdom’s Behnām and his sister Sārah, in the second half of the IVth century (372). The « pit » in which they lived their martyrdom is therefore the center of gravity of an intense popular devotion.

The convent’s emblematic centrepiece is the big high-relief finely engraved representing Mar Behnām on his horse defeating the devil.

The justification of its foundation is entirely included in the story of martyrdom’s Behnām and his sister Sārah, in the second half of the IVth century (372). The « pit » in which they lived their martyrdom is therefore the center of gravity of an intense popular devotion.

From the history, let us remember the analysis made by the scholar Jean-Maurice Fiey in his monumental work « Christian Assyria » [Institut de lettres orientales, Beirut, 1965-1968 (3 vol.)] widely quoted in this document.

The Dominicain and huge orientalist seems convinced of the potential Persian Sassanid’s origin of Behnām, which he places around the IVth, Vth, or VIth centuries. More than dubious about the effective historicity of Mar Behnām, the scholar confronts the impressive popular tradition to the meagre data sources. He gladly underlines its multiple legendary aspects, « because, of course, if we cannot be a saint when we are neither a monk nor a martyrdom, we cannot be an interesting martyrdom if we are not a king, or at least son of a king (…) » which is the case of Mar Behnām, presented as Sennachérib’s son, king of the Syriac capital city of Nimrūd (Kāleh), despite well known anachronisms of such a paternity and geographical incongruity that archeologists from the British School of Archaeology raised in 1949.

In fact, the legend –the tradition (editor’s note)- of Mar Behnām can entirely be found in one original but criticized source, the Chronicle of a Edesse’s monk of the XIIth – XIIIth century. Its prodigious substance, as described by Sārah, Behnām’s sister, has healed her from the leprosy thanks to Mar Matta’s monk, presented to her by the prince. The scene occurred at the locality of a miraculous source, which, besides the healing of a sick princess’ flesh, was also the source of a spiritual healing, that is to say the children’s king baptism. The latter, who has gone mad mad because of this conversion, decided to kill his own children who therefore became martyrs of the faith, together with the 40 companions  who were members of  Behnām’s princely suite.

Sennachérib’s conversion would not have unfolded without Queen Širīn’s intervention, who, « in order to cry at her ease had a tunnel dug, 7 km long between her palace and the martyrion raised on the martyrdom’s « pit ».  Finally, she converted her husband, exorcised by Mār Matta, so as to reunite them all in glory ».  Reporting the tradition this way, Jean-Maurice Fiey notes that « everybody, the Christians who live in the mouvance of the monastery, as well as the Arabs from around Nimrūd, was absolutely convinced in the existence of this tunnel, and that the find of any hole is hailed as the discovery of the tunnel’s entrance (…) ».

That is how was established and transmitted, through the centuries until nowadays, the fabulous epic of Assyria’s conversion to Christianity and the edification of the famous monasteries that follow.

More than a convent, which in fact « he has not been over the course of its history » tells Jean-Maurice Fiey, Mar Behnām’s sanctuary was, more precisely, a martyrion, and also a hotel for the pilgrims who were passing by.

In the local tradition,  Mar Behnām’s grave is also visited by a huge amount of muslims and Yazidis, and especially by women, who come to ask the saint’s intercession for everything concerning abundance and fertility (harvest, cattle, children).

On the localisation of the shrine, very close to the convent, Jean-Maurice Fiey makes another assumption that the tell (artificial hill artificielle), at the North-East side of which directly is the martyrion, could possibly shelter a primitive church, and if it is the case, it would probably be « the oldest church of Iraq ».

Throughout the centuries, let us mention the restoration-reconstruction of the church, the altar and sculptures between 1164 and 1295, the XIIIth century, « Mosul and Mar Behnām’s golden century. Its monks go and come to Egypt (…) », the strong controversies concerning the union with Rome from the XVIth century, and the relocation of the manuscripts at the big Orthodoxe-Syriac monastery Deir ul Zafaran at the gates of Mardin (South-East Turkey).

In 1839 Mar Behnām’s convent was definitely converted to Catholicism underlines Jean-Maurice Fiey, without even knowing any monastic activity, although often visited by orientalists.

The twenty first century began with a site’s restauration’s campaign in 1901, and even more in the 30’s under the authority of Mgr Ephrem ‘Abdal, former convent’s superior, who published a big amount of brochures [Beyrouth (1954) and Bagdad (1964)] and other works on this site’s history (Histoire du couvent de Mar Behnām, Mosul, 1951) its sculptural richness and its holy founder (Vie des deux grands princes Behnām et sa sœur Sārah, martyrs, Mosul, 1949). Closer to us, in 1986 occurred one of the last beautification campaign of the entire du site.

Magnified for its décorations’ richness, Mar Behnām’s convent still wears nowadays traces of the major renovation and beautification of 1164. On the walls, doors,  doorframes and lintels are also written the name of the donors  and artists of that time.

A deeper presentation of this architectural and decorative set is now required and will be gradually presented throughout this document. It precisely is this exceptional heritage that Daesh targeted, during the site’s occupation, between July 2014 and November 2016. The iconoclastic defiler destroyed with chisel and jackhammer many bas-reliefs and  high-reliefs outside and inside the convent (crosses and figures mostly) constituting of this exceptional decorative and multi-centenary set.

The convent’s emblematic centrepiece is the big high-relief finely engraved representing Mar Behnām on his horse defeating the devil. This stucco work of art embedded in the wall has probably been sculpted at the XVth century, or even before as defended by Jean-Maurice Fiey. This work has been totally devastated by Daesh, as well as the Mart Sārah’s bas-relief on the pillar in front of it.

Even more significant is the Behnām and Sarāh’s marytirion’s destruction with explosives in march 2015 which would be dated year 1300. The ruines recovering the funeral monument do not allow us to tell the shape of the latter. The shape of the Armenian stone cross (khatchkar, in Armenian language) would also require to be verified, and was embedded in the martyrion’s wall on the right of the funeral altar. This lacework of stones reveals complex cultural and spiritual interpenetrations that could unite (and disunite) churches and confessions of Mesopotamia, Minor Asia and Armenia.

The poor state in which the Mar Behnam shrine was discovered when ISIS fighters were removed from the location in 2016 was dreadful and yet reassuring. While everything seemed destroyed and irrecoverable, as testified by what was seen at first glance and by the leeked footage of its explosion in 2015, the sorting of the rubble showed promising signs that most of the ancient elements could be saved.

The shrine complex can be divided into four sections : the entrance building which was completely destroyed (including its bedrock), the tunnels which were too damaged to be saved, the cistern or martyrium in which the cupola and the arch in the entrance collapsed and finally a small chamber next to the martyrium which could be saved. About twenty cans of high explosives hadn’t event detonated, leaving most of the cistern’s walls intact.

As soon as the monastery was liberated, the non-profit organization « Fraternité en Irak » pledged to rebuild the shrine. The first actions to clear all the rubble began in June 2017. Thanks to a meticulous sorting of the debri, most of the sculpted elements were recovered intact. Fortunately, presumably destroyed by the explosion, these sculptures had not been smashed like the ones in the monastery.

After the final demolition of all dangerous parts, especially the tunnels, the first bricks were laid in mid-January 2018. The overall reconstruction as well as archeological research is currently taking place. The materials used are the same as in ancient construction: bricks taken in the ancient houses of Qaraqosh and hydrated lime. The shape of the dome will not be the same as the one destroyed in 2014. In fact, this shape was the result of the layering of cupolas, the latest one dating back from 1980. This caused a change of the original form and it eventually became dangerously heavier. A decision was made to recreate the shape that existed in the 1920s. Hence, it will consist into a system of a double layered cupola. As for the entrance building, it shall be rebuilt from its foundations which were found after the rubble was cleared.

Great care is also given to the preservation and the return in the martyrium of the sculpted elements. This endeavor is undertaken by a team of French restorers.

News of the mausoleum of Mar Behnam

The reconstruction of the Mar Behnam Mausoleum has been completed since the summer of 2019.

They have been done in two years, since July 2017.

On December 10, 2018, the feast of Mar Behnam was celebrated for the second time since the liberation.